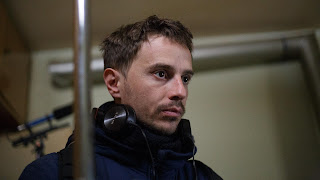 Interweaving the personal and the collective with dexterity and confidence uncommon for a debut feature film-maker, Gjorce Stavreski’s poignant black comedy Secret Ingredient simultaneously deals with the dysfunctional healthcare system in F.Y.R.O.M. and a dysfunctional father-son relationship, while contemplating what makes life worth living in unlivable times. In conversation with the talented director ahead of the film’s Greek release on July 19th.


Interweaving the personal and the collective with dexterity and confidence uncommon for a debut feature film-maker, in Secret Ingredient you simultaneously touch on the dysfunctional healthcare system in F.Y.R.O.M. and a dysfunctional father-son relationship, while contemplating what makes life worth living in unlivable times. Have all these thematic threads been there ever since you first conceived your film?


Well, yes, the themes were there from the beginning, but in a slightly different form. When I started to write, the film was conceived as a family drama and it was much darker. But then I started feeling frustrated with the script. When I now think about it, I was actually struggling with some kind of personal crisis connected with my creative identity. I’m a person who enjoys humor a lot, but I was trying to keep it at distance from my work. I thought that it’s contaminating my urge to make pure drama and I kept it at bay.


Anyway, something was fundamentally off with my story and I didn’t enjoy writing it anymore. We were also rejected by one pitching forum and a producer who works there gave me some nasty comments, which made me realize that I didn’t believe in the story enough to stand by it and defend it.


In a way, that created a perfect storm, so after some difficult weeks of anxiety and nihilism it all resulted with throwing in the towel and saying: “Fuck it, I’m denying my God of drama, life is meaningless anyway, even more so in this crazy country- I’ll do a comedy”. So, although everything was there at the beginning, it had a different flavor that I didn’t believe in. And thanks for the compliments. The characters of Secret Ingredient feel real and not like caricatures, and your approach towards them is imbued with dignity, generosity, respect and tenderness. Are there parts of you traced in them? And how do you work with actors/actresses?


Thank you, I appreciate your kind words. If I’m honest about it, the main character, Vele, was subconsciously written with me as a role model. But I found an actor fundamentally different from me, and at the same time he strangely seemed perfect for the role, if only I was willing to do a major script change.


In the story there are two young brothers who were vastly different: one was nerd, with perfect grades, who won awards as a science prodigy and who wants to be a computer scientist; and the other one who is not as ambitious, hates school and authorities, and chooses the mundane life of their father working as train mechanic. But in a fatal car crash the brother mechanic dies with their mom and the nerdy brother starts working as a train mechanic himself to support his depressed and sick father.


The problem was, as I said, that I found an actor who was perfect as the brother mechanic who dies. So, I decided to kill the “nerd” instead and adapt the script for the mechanic. Suddenly, everything fell into place.


Regarding your second question, I think the most important thing when working with actors is the mutual trust. I was trying not to impose myself and listen to the actors’ valuable feedback, but at the same time protecting my original vision: realistic acting and the deadpan humor. 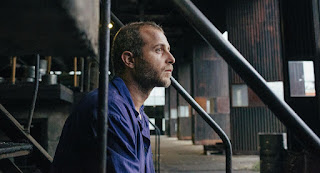 Your film is typically “Balkan”, primarily in the way it balances between the comic and the tragic, the light-hearted and the deeply despondent. How do you personally perceive what may be termed as “Balkan-ness” in art, and especially in cinema?


I have to say that I have a love-hate relationship with the term “Balkan”. In music, for example, my first association would be the trashy “turbo folk” coming mostly from Serbia and Bulgaria, which I really hate from the bottom of my heart. In cinema, especially in the countless comedies coming from Ex-Yu countries -excluding the “Black Wave” movies in the ‘60s-, I despise many things that I connect with the term “Balkan”: chauvinism, insensitive humor, over-the-top acting, shallowness of the plot, etc.


Putting that aside, in light of your charmingly coined definition above, I have to say that I enjoy a lot of recent “Balkan” releases: contemporary Bulgarian films, new Romanian cinema, the Greek “Weird Wave” and also some cool new films coming from Ex-Yu countries as well. That’s a hell of a bunch of filmmakers and in that sense, if my film comes across as a typical Balkan one, I regard it as a great compliment. As for my own influences, I’d say I was mostly inspired by the Italian Neorealism, Czechoslovak New Wave and another bunch of brothers as well: Coen and Dardenne.


Secret Ingredient is also profoundly political, though in cinematic terms. As a film-maker, do you feel morally obliged to tackle sensitive societal issues through your work? And, if so, what is the most pressing problem in contemporary F.Y.R.O.M.?


Yes, I really felt a personal obligation to speak up about our current issues. The film is a powerful medium and every filmmaker has to wisely choose his/her battles. I also think that contemporary European cinema is much more preoccupied with the standard center-left “identity politics” issues, turning a blind eye to social subjects, inequality and poverty. Being raised in a lower income family, I’ve felt many of the problems on my own skin, so it was a natural decision for me to take a stance and tackle those subjects.


Answering your second question, I think the most pressing problem in Macedonia right now is the corruption, especially our corrupted, dysfunctional and almost dismantled rule of law. Besides the absurd faux-baroque buildings of “Skopje 2014” this was another “gift” from our previous government. I’m not sure how much of that has changed since they lost the elections, but we are constantly witnessing selective justice, hearing about corrupt officials and overturned sentences.


It’s a country where the corruption is so blatantly obvious, that I think nobody believes in justice anymore. In my eyes, that’s a much bigger problem than the “name dispute”, which is just a function, a symptom of the above. 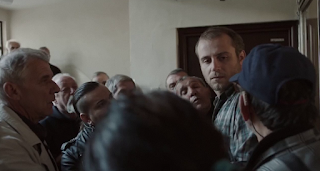 On the whole, I think that you make plebian cinema with cinephile sensitivities. Do you agree?


Plebian, cinephile-sensitive cinema. Wholeheartedly yes. That has to be one of the coolest compliments the film has received. What can I say, I really sympathize with the ordinary people. I believe, contrary to the narrative offered by the elites, who argue that most people are not educated enough to make the right choices, that first and foremost it’s the poverty and inequality that’s driving the most decisions made by the “99%”.


And however unexpected those decisions may seem (Syriza wining in Greece), or downright absurd (Brexit and Trump) they are quite logical in a sense that people know they are manipulated and disrespected, and vote nihilistically to punish the “status-quo” politics of the center parties, which seem to differ less and less, jointly disregarding the ailments of the working class.


From time to time, people ask me the same question over and over again: “Why the obsession with the poor?” I always say: “First, they need a voice, and second, that’s where the real (cinephile-sensitive) stories lay”.


Your debut feature is a co-production between F.Y.R.O.M. and Greece. How crucial has this factor been with regard to the completion of your film?


I enjoyed collaborating with my friends from Greece. Many things were vital. I can’t thank enough my co-producers Konstantina Stavrianou and Rena Vougioukalou from Graal S.A., for the trust they had in the story and in me as film-maker. In the midst of the financial turmoil in Greece, they managed to secure funding by persuading the decision makers in the Greek Film Centre that this film is worth making, which made this cooperation possible.


Lastly, the creative input we’ve received from our Greek colleagues complemented perfectly the areas where I felt we needed most help: in production I received invaluable comments from my co-producers and during post-production we did amazing job in Athens with the colorist Yannis Zaharoyiannis and dubbing mixer Kostas Varibopiotis. 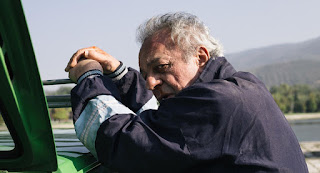 Secret Ingredient started its successful journey towards international critical acclaim and audience appreciation from last year’s Thessaloniki Film Festival, where it won the audience prize in the Balkan Survey section. Did that award come as a surprise?


Yes, you bet. Oh, man, I had such a great time. Our wonderful hosts, the Balkan Survey director Dimitris Kerkinos and his right-hand man Yannis Palavos, made sure we felt special when we arrived, arranging interviews and making sure everything goes smoothly. During the first screening, on the world premiere of our film, I felt so emotional, I couldn’t hold back my tears. I was also stressed out and I didn’t know what to expect. Then magic happened, a relief: people were really enjoying the film, smiling to the jokes, silently grieving to the misfortunes of our hero.


At the end there was a thunderous applause that melted my heart. During the unforgettable Q&A session I realized that people didn’t take the film lightly, but were deeply touched and wanted to talk about the many similar issues and problems that we seem to share. When the film won the award, I was told that it got one of the best scores on the festival ever. It was a blast.


The award ceremony was really special. It felt like a dream. I was so afraid that I’d make a mistake with my acceptance speech that I don’t remember many things actually. But I remember the smiles and hugs. Glorious times. 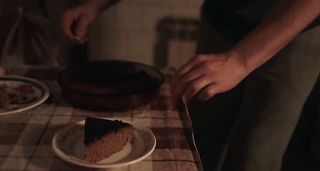 You’re currently “drowning” in the preparation of your follow-up film. Do you feel that you have discovered the ingredient of success? What’s your (secret) “ingredient” in life, after all?


I’m developing stories- some are much different than this one, others breathe the same air, but I’m not sure what’s next honestly. I have no recipe of course. I can’t say that I’ve discovered anything actually, neither in movies nor in life. I’m even more confused now, the mystery of my existence deepened even further. But not everything was in vain, and though my life is as enigmatic as before, I’ve actually found some “ingredients” that kept me away from burning my laptop in frustration while editing the sound in my bedroom, and then immigrating as far away from the Balkans as possible.


What helps: a glass (or five glasses) of bourbon a day, jogging at least twice per year, playing guitar and mumbling, and arguing with right-wing lunatics about the perils of capitalism on Internet using my iPhone, while watching the World Cup on my flat TV. Another thing I learned: we live in wondrous times with many ingredients. 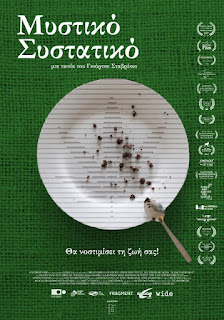