Mahmoud Salameh: “I respect cartoons and they respect me, too” 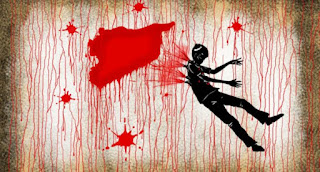 Poignant political cartoonist and director of animation films, Palestinian Mahmoud Salameh, born in Yarmouk camp in Syria, has been living for the past 3 years in Sydney, Australia, as a political refugee. He talks to me about his experience as a refugee, his art, Palestine, that he has never even seen, and the situation in Syria. 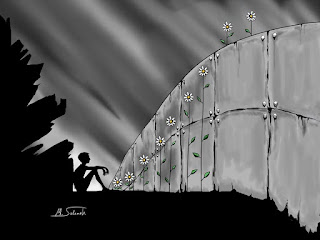 When and where were you born?


I was born in 1972 in Yarmouk camp, in the south of Damascus. Before the revolution, 160.000 Palestinians were living there. It has been in existence since my parents came from Palestine as refugees.


Where in Palestine were your parents from?


My father from Bir Saba (Beersheba), in the south of Palestine, my mum from Haifa. 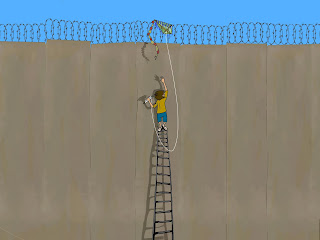 How was the situation in the camp?


In the beginning, the situation was very hard for the Palestinians, you know. Now I can see how my parents were feeling, because I’m a refugee for the second time, having reached Australia, a beautiful country, where we’re being supported and taken care of.


Are your parents still alive?


My father is dead, but my mum lives in Dubai with my brother.


As a refugee, you must have faced many difficulties before settling in Australia, though. How hard has this experience been for you?


It was hard, because I remained a lot of time in detention, almost 17 months. I understand that the government follows a process with regard to the refugees reaching the country, especially those without papers arriving by boat. They want to control who each one is. But my case was clear- I have my documents, my papers, my experience. Everything was clear. I don’t know why so much time was required. 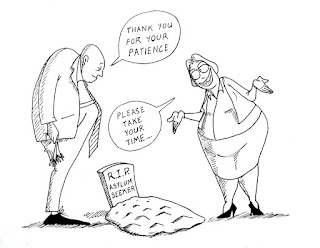 Do you think that the fact that you’re an artist and your work is known play a role in you being recognized as a refugee- at the same time when others, who don’t have similar work to produce, have been less fortunate, or not fortunate at all?


The situation is difficult for everybody. The chose me for security check, maybe because I’m a Palestinian. When we arrived by boat, we were 10 Palestinians, 9 refugees from Iraq and me from Syria. The fact that I’m an artist, a political cartoonist, constituted a very good reason, so that I was granted protection. I was, in fact, accepted after my first interview at the detention center. As I already said, it just took a long time, until the security check was conducted.


How were you treated by the authorities?


Very normally. They transported us to the detention center on Christmas Island. 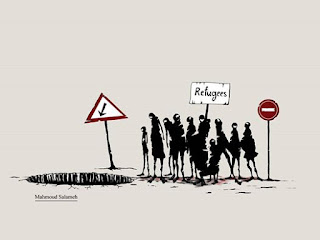 That’s good, because this is not the case with all those who have been forced to leave their countries either as refugees, or as economic immigrants. Most have horrible stories of abuse and hardships to tell- and then, to deal with the difficulty integrating into a new country and society. So, you’ve been luckier than others.


That’s true, but there was a different government then. Now, they’re sending the refugees and the immigrants to other detention centers, where the conditions are very bad. Sometimes, women are raped there by the guards. Recently, a few months ago, a woman, who became pregnant after having been raped, gave birth to a child.


How are you treated by the people, with whom you communicate on a daily basis- from your fellow artists, to those in the place where you reside and the simple people on the street?


Because I’m very capable- I’m involved with animation and visual arts, acrylics and oil- and very active with the people around me, I have very good relationships with them. 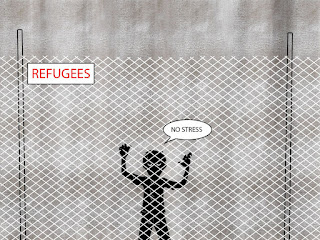 How did the Refugee Art Project get in touch with you, in the first place, and then help you get your work more known?


The Refugee Art Project is a group that creates art especially for refugees and collects the work of refugees from detention centers and out of them. Some of the people involved in the events organized aren’t refugees themselves, but, whoever wants to support the refugees and send a message to the people, is welcome in this group. I got in touch with them when I knew only a few people in the country. The manager of this project is a friend of mine.


Tell me how you started drawing political cartoons.


I started publishing my cartoons in Beirut, Lebanon, in 1997. I lived in Lebanon for 3 years. The situation there was much better than in Syria, where I couldn’t publish my work, because I would get into trouble with the security services. You knew what sort of government was in power, what kind of system was prevalent. It’s difficult to express your opinion in Syria, you have to be more flexible towards the government and with regard to the things you want to talk about. I didn’t like that situation, though. I respect my cartoons and I think that they respect me, too. When I returned to Syria in 2000, I had a very good name. So, I started organizing exhibitions, where I invited my friends. In 2003, they made me sign a statement that I wouldn’t draw anything against the government. I, therefore, started making educational animation films for children, for economic reasons, until 2009. 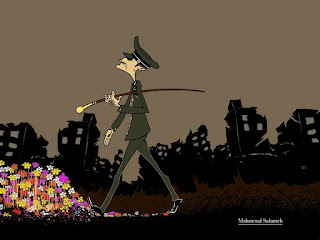 Why did you choose Australia as your country of immigration?


Going to Europe was very difficult, and I was worried that, if I went there, I might be sent back to Syria, because, at the time, Syria had good relations with some European countries. Moreover, I have a brother in Perth, so I thought that Australia was the best option for me.


I assume that you’re still involved in animation.


Yes, I’ve made 2 films and I’m now working on a new one with an Aboriginal director. I was also involved in the Palestinian Film Festival, where I was responsible for the opening animation. 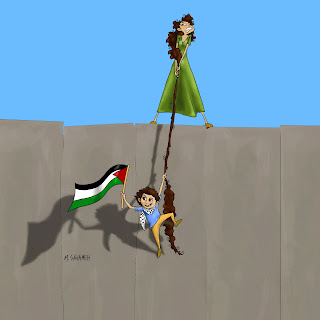 You’re Palestinian. I’m wondering, have you ever lived in Palestine?


No, never. I haven’t even seen Palestine...


How attached do you feel to Palestine, Palestinian culture and politics?


I’m very angry. What Israel and Zionism have done to my country is that they have kicked out all the people without any right. Since they have the power, they do what they want and there’s nobody to judge them. They still punish the people to this day.


What about Syria? Do you feel close to the people who have been forced to flee from it?


Absolutely! What I like in Syria is the people, they’re amazing. As a kid, I saw how they were treating the Iraqis. If a Syrian family had a spare room, it gave it to the Iraqis. They taught me how to help, too. So, in 2006 I volunteered in the border with Lebanon, welcoming refugees. What has now happened to the Syrians makes me sad, they suffer in Europe. 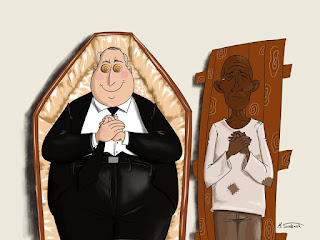 Do you think that a solution to what they’re facing may be found? What’s the best thing that could happen in Syria?


When the Syrians started the revolution, they were demanding rights and wanted freedom. Believe me, they have a cosmopolitan mentality, they love other cultures. Because of the fact that the regime treated them so badly, it “broke” them. They had been suffering for 40 years and, in 2011, the time had come for them to take a step, to express their opinion, and that coincided with the Arab Spring. They didn’t expect that the regime would be so harsh and bloody, though. 300.000 people have been killed, 11.000.000 Syrians are expatriated and Assad is still in power. What kind of President is he?


With all that’s happening, and not just in the Middle East, do you feel any hope for the future?


I remember my parents. We’ve been living out of Palestine for 66 years and still hope to return there. Of course I’m not optimistic, because the situation is in the hands of those that have the power: USA, Russia, Iran, Turkey. What happened in Syria is not similar to what happened in Egypt or Tunisia. It’s complicated. Russia insists on supporting Assad, I think that the USA wants to destroy Syria, because it’s close to Israel, and the Syrian regime is just sectarian and mafia-like. Syrians love their country, though, and will continue their struggle.


His page on the Refugee Art Project’s website is http://therefugeeartproject.com/home/the-cartoons-of-mahmoud-salameh/ 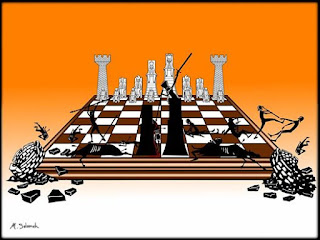